Last updated on 07/01/202115/04/2021
Jump to Topics
7.1
Big Data Analysis and Precision Medicine Provide the Direction for Future Research in Sepsis
7.2
AQPs Provide a New Approach for Sepsis Treatment
7.3
Outlook on the Intersection of Sepsis and AQP-Based Therapy
7.3
References

New pharmaceutical drugs, big data analysis, and precision medicine may provide future direction for upcoming research in sepsis. With the new approach of AQP-based therapy, we may have a drug that specifically targets dysregulated immune function in sepsis before the end of this decade.

Sepsis has been recognized globally as one of the deadliest and most expensive conditions. In modern industrialized societies, the main additional challenges are the increased prevalence of older patients and co-morbidities, together with shortened post-surgery hospital stay. However, the solution remains distant. Among the main reasons are the heterogeneous nature of sepsis and its diversified outcomes.

The digitalization of healthcare systems is changing the way we conduct clinical research and practice medicine. Intensive care units (ICU), which have been shown to have a 29.5 percent prevalence of sepsis144, present a particularly convincing case for using scientific data to improve patient care145, due to the tremendous amount of data that can be collected in an ICU setting. Between 2012 and 2018, a thorough analysis was conducted of patients with a diagnosis of sepsis who were Medicare beneficiaries. One of the most important findings was that patients admitted with sepsis tended to have pre-conditions such as pressure sores, aphagia, dysphagia, unspecified protein-calorie malnutrition, or a chronic state of inflammation. This finding suggested that sepsis may develop in patients after a period of unrecognized inflammation or low-grade infection, thus opening new pathways for early detection and intervention in vulnerable patients.146

The European Society of Clinical Microbiology and Infectious Diseases has recognized that big data analysis, designed to identify potential genotypes and associations, will play a significant role in the future of sepsis management.147

At the same time, precision medicine takes big data analysis one step further by recognizing subgroups of sepsis patients identified by gene expression, protein markers, or clinical parameters. The inflammatory process may take distinctly different courses in these subgroups, who may respond differently to clinical interventions, including new immuno-modulating therapeutics, such as the AQP9 inhibitor developed by Apoglyx.

Precision medicine suggests that we cannot expect a magic one-size-fits-all cure for sepsis patients. In the last decades, several potential avenues of treatment have been discarded due to disappointing results in clinical trials.148

However, at a time when new approaches for sepsis management are urgently needed, Apoglyx has presented some very promising pre-clinical results for its AQP9 inhibitor-based therapy.

Dr. Søren Nielsen, a professor at the Department of Biomedicine, Aarhus University and the Department of Health Science and Technology, Aalborg University in Denmark, who is also a co-founder of Apoglyx, told Supertrends: “We are working on the role of AQP9 in sepsis and other conditions. Through our collaboration with other universities, we found strong evidence that the inhibition of AQP9 demonstrated a protective effect from sepsis in rodent models, especially on heart function. Many aisles in finding new efficient treatments for sepsis have been closed. It is crucial to develop something new based on this preliminary evidence.”

Another prominent scientist shares the optimism on the potential of AQP-based therapy. Professor Angela Casini is the Chair of Medicinal and Bioinorganic Chemistry at the Technical University of Munich. Her team was one of the first to discover a selective AQP channel inhibitor. She thinks that with optimized AQP inhibitors as drug candidates and good pre-clinical results, Apoglyx could potentially accomplish the goal of developing an AQP-based therapy in a few years.

Outlook on the Intersection of Sepsis and AQP-Based Therapy

Outlook on the Intersection of Sepsis and AQP-Based Therapy

Apoglyx is planning to submit its Investigational New Drug (IND) application to the FDA and start a Phase 1 clinical trial in 2022; whether alone or in partnership with larger pharmaceutical companies, it is looking at potentially gaining approval and entering the market in less than ten years. 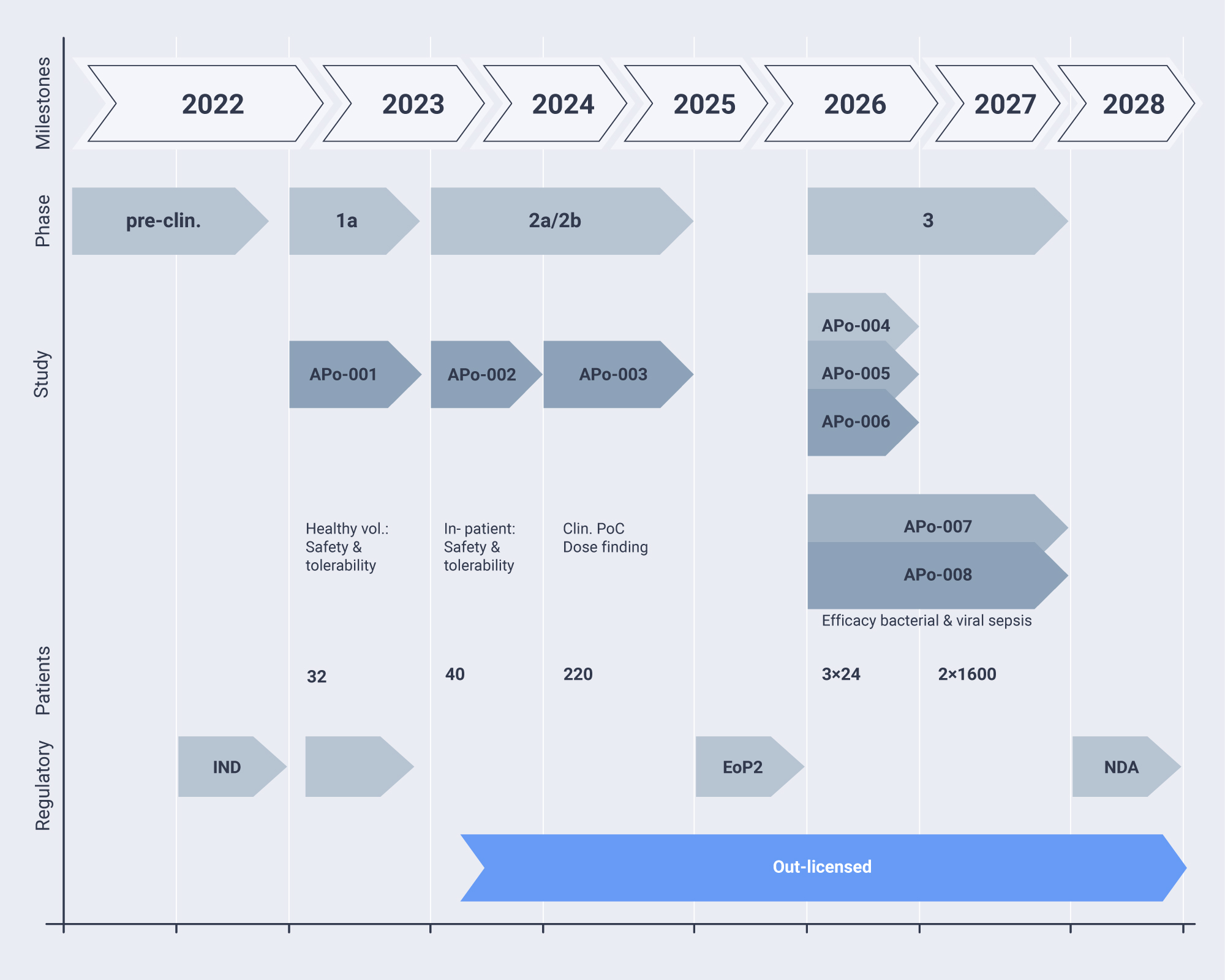 As we are writing this report, exciting news came from the latest pre-clinical test results. regarding the efficacy of AQP9 inhibitors.

Apoglyx has been working with Professor Christoph Thiemermann on AQPs and sepsis for the past 18 months.

Prof. Thiemermann is the Director of the Centre for Translational Medicine and Therapeutics at the William Harvey Research Institute in London. He is an internationally recognized expert in the pathophysiology and experimental therapy of shock and ischemia-reperfusion injury.

To accurately reflect the impact on AQP9 inhibitors in experimental sepsis, Thiemermann used a clinically relevant mouse model of abdominal sepsis, leading to systemic infection and cytokine storm, and ultimately to multiple organ dysfunction. The AQP9 inhibitor was given orally as late as three hours post the onset of sepsis, and cardiac function, renal function, and liver injury were measured to evaluate the efficacy of the intervention.

In an interview with Supertrends, Thiemermann described the results as striking. “With any oral administration, there is some lag-time for the absorption. Even if the absorption is quick, it will be around half an hour. Thus, we estimate the drug being in the blood stream approximately three-and-a-half hours after the onset of sepsis. Despite this relatively late administration, the AQP9 inhibitor was still able to reduce the degree of cardiac and renal dysfunction caused by sepsis. This is quite a striking result. We have never seen a drug that is administered after three hours after the onset of sepsis and is still effective.”

For companies that are currently developing immunotherapies for sepsis, it is essential to keep the lessons learned previously in mind and apply a more personalized approach. Apoglyx CEO Rutzler told Supertrends: “In our clinical trial phase, we will work very closely with the clinicians to better understand which group of patients will respond better to AQP9 inhibitors. Our aim is to define the characters of the sub-group of patients that will consistently respond well to our therapy.”

Equipped with a better understanding of the heterogeneous nature of sepsis and the approach of precision medicine, we may finally be able to develop an AQP-based therapy that specifically targets dysregulated immune function in sepsis before the end of this decade.