In the following, we offer two timelines listing some important milestones that have assisted researchers’ understanding of sepsis, as well as landmark discoveries related to AQPs and their implications for health. Neither the present report nor these timelines aim to include all the events that have happened or are happening in the two fields. The aim is to illustrate the future trends in these areas and the interaction between them.

The first consensus definitions of sepsis, severe sepsis, and septic shock were formulated at an SCCM-ACCP conference.12

The second version of these definitions expanded the list of diagnostic criteria.13

The Global Sepsis Alliance, a non-profit charity organization, was founded to provide global leadership in reducing the worldwide burden of sepsis.

The first World Sepsis Day was held on 13 September, and the day has been observed annually ever since.

The Third International Consensus Definitions for Sepsis and Septic Shock (Sepsis-3) was published. Clinical criteria for organ dysfunction (SOFA) and septic shock were also updated, together with the establishment of quickSOFA to be able to offer help rapidly.14

The World Health Organization recognized sepsis as a global health priority and adopted a resolution addressing the issue.15

Major milestones in AQP research and their development in medicine

Major milestones in AQP research and their development in medicine

The first AQP was discovered by Peter Agre.17

The first high-resolution structure of an aquaporin was observed by x-ray crystallography.20

The Nobel Prize in Chemistry 2003 was jointly awarded to Peter Agre and Roderick MacKinnon “for discoveries concerning channels in cell membranes”. Agre was recognized “for the discovery of water channels”, while MacKinnon shared the award “for structural and mechanistic studies of ion channels”.21

Apoglyx will use the first AQP-9 modulator in a clinical trial for sepsis or sepsis related diseases.

The first AQP-9 modulator for treatment of sepsis or related diseases is projected to be available on the market. 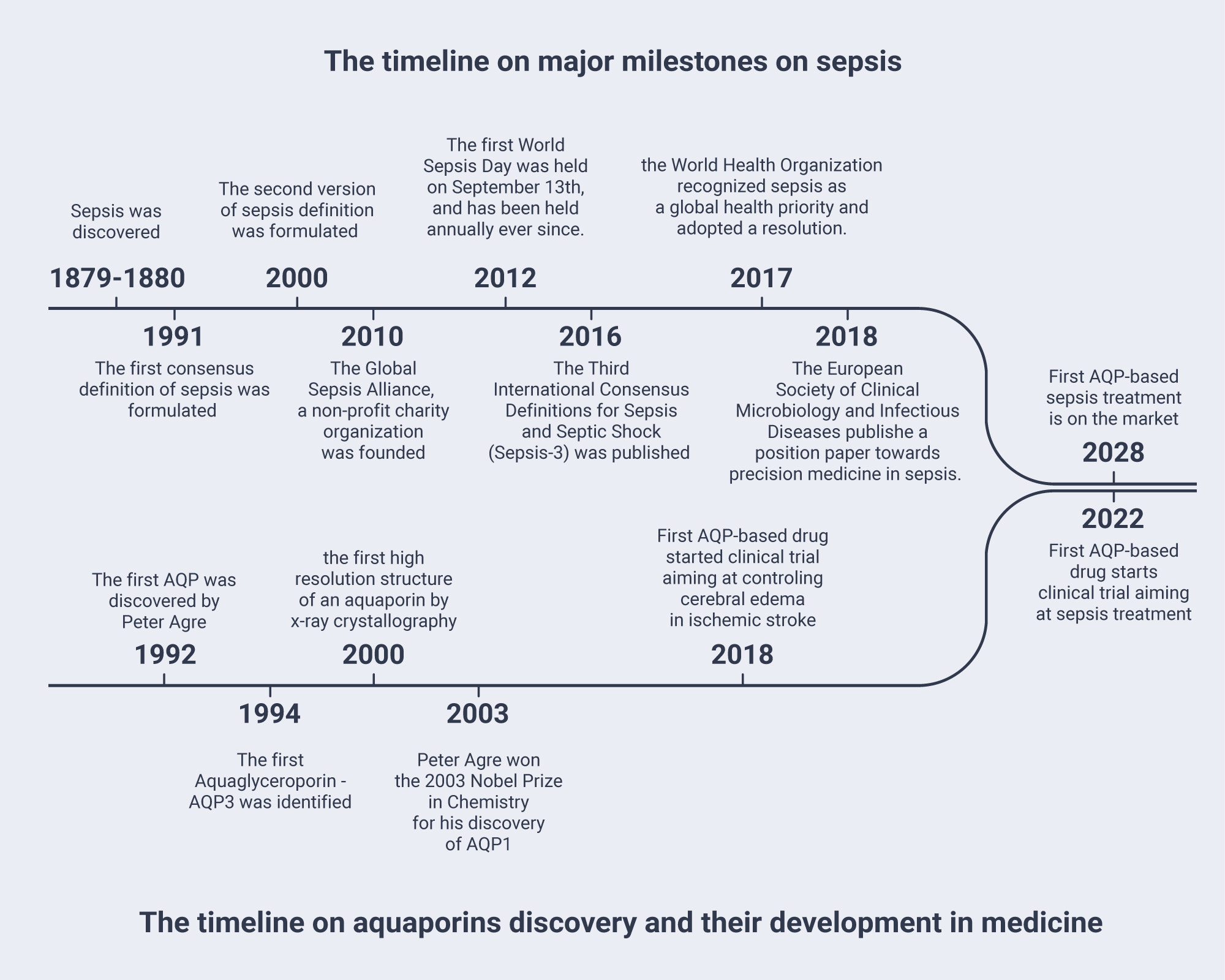 The last two decades have seen a better understanding of cell biology, biochemistry, immunology, and morphology, as well as changes in circulation and organ function. This understanding has led to the changes in the definition and management of sepsis. The current approach of precision medicine provides new opportunities.

Precision medicine: also referred to as personalized medicine is a concept that proposes the customization of healthcare, with medical decisions, treatments, practices, or products being tailored to an individual patient or a subgroup of patients, instead of a one‐treatment‐fits‐all model.23