Sepsis is one of the oldest syndromes to be described and named in the discipline of medicine. It is also one of the deadliest and costliest diseases, yet public awareness of sepsis remains poor. Sepsis is defined as a life-threatening organ dysfunction caused by a dysregulated host response to infection. The most common acute organ dysfunction in sepsis is acute respiratory distress syndrome (ARDS) and hypotension. The pathophysiology of sepsis is complex and multifactorial, involving both pro-inflammatory and anti-inflammatory responses from the host. Clinical guidelines for sepsis management are twofold, encompassing an early-goal-directed therapy and a supplemental management protocol. Novel therapies based on recent advances in molecular biology, combined with a personalized medicine approach, afford promising prospects for the future of sepsis management.

Sepsis - one of the oldest and most elusive syndromes in medicine

Sepsis - one of the oldest and most elusive syndromes in medicine

Sepsis – one of the oldest and most elusive syndromes in medicine
Sepsis was one of the earliest medical syndromes to be described in the history of medicine, with descriptions dating back to Hippocrates.24 25 Despite advances in care, it remains a global public health emergency affecting millions of people and is one of the largest causes of death worldwide.26

A recent study using data from GBD 2017 put Sepsis high on the list of global causes of death. The study estimated 48.9 million sepsis cases worldwide and 11 million deaths related to sepsis in 2017.27 This number puts sepsis above the second-deadliest disease worldwide – Cancer, which accounted for 9.56 million deaths in 2017.28 With the increasing incidence of global virus epidemics, viral sepsis is also on the rise. In a study on hospitalized COVID-19 patients in Wuhan, China, sepsis was the most frequently observed complication.29

Sepsis is also one of the costliest conditions in hospitals. Accounting for more than US$20 billion (5.2 percent) of total US hospital costs in 2011, it was the most expensive condition treated in US hospitals.30 Furthermore, severe sepsis in older patients was independently associated with substantial and persistent new cognitive impairment and functional disability among survivors. This could result in significant healthcare and social implications.31

Despite the worldwide importance of sepsis, public awareness remains poor not only in Europe and the US, but also in Asia. In a survey done in 2009 in Italy, Spain, the UK, France, and the US, a mean of 88 percent of interviewees had never heard of the term “sepsis”; and of people who recognized the term sepsis, 58 percent did not recognize that sepsis is a leading cause of death.32 In another survey conducted in 2014 in South Korea, 76 percent of the interviewees correctly defined acute myocardial infarction, 90 percent could define stroke, but only 27 percent of the same interviewees were able to give a correct definition of sepsis.33 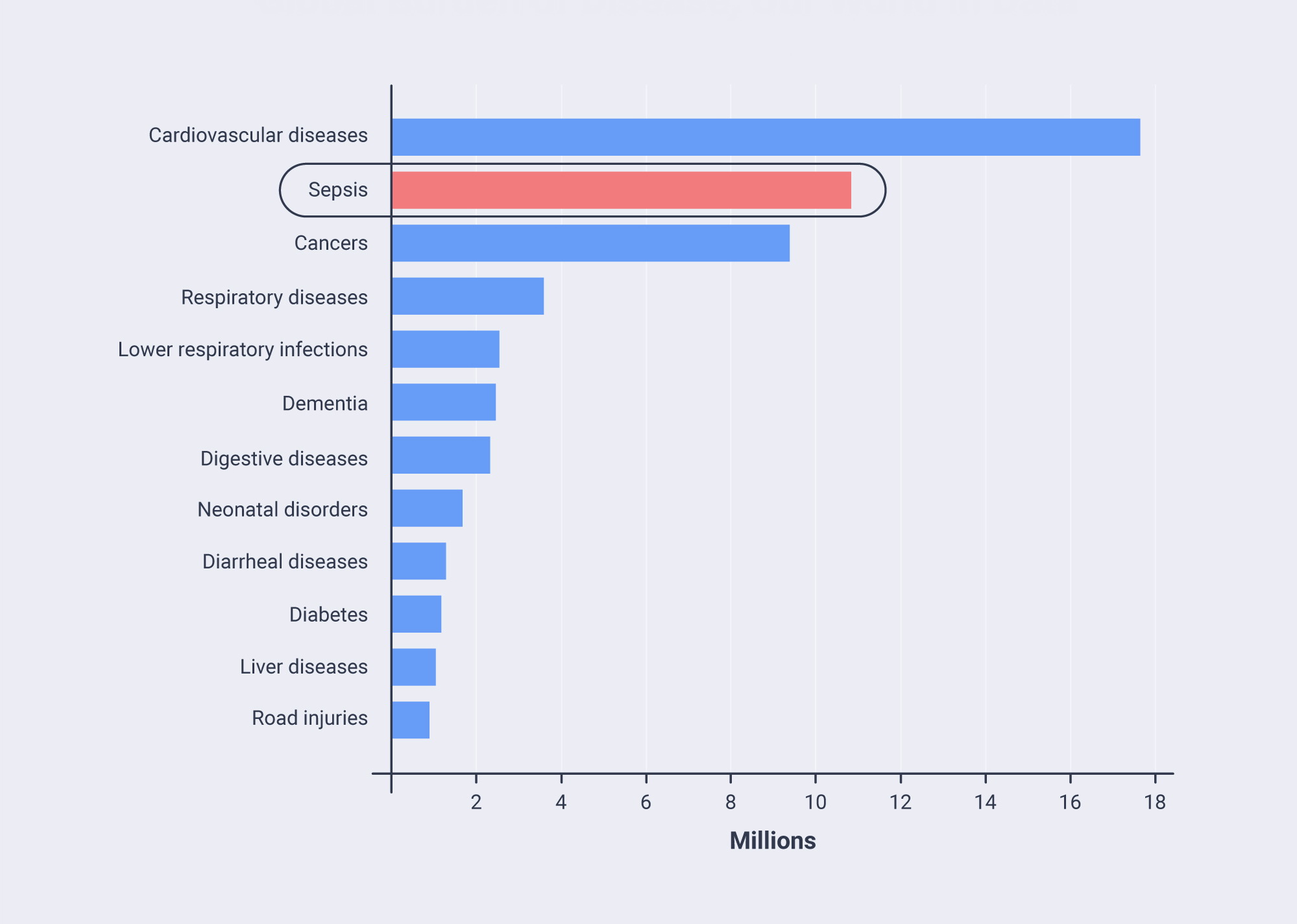 In figure 3.1 we combined data from the World Health Organization (WHO) for 201634 with estimates for sepsis by Fleischmann et al.35

Sepsis is not a specific illness, but rather a syndrome encompassing a still-uncertain pathobiology. Three definitions and related conditions have been developed over the past 20 years. The evolving definition reflected a better understanding of sepsis pathobiology.

The initial definition of sepsis, which was developed in 1991, focused excessively on inflammation. It was also based on a misleading model, which assumed that sepsis follows a continuum through severe sepsis to shock.36 In 2001, the second set of definitions expanded the list of diagnostic criteria. In effect, the definitions of sepsis, septic shock, and organ dysfunction have remained largely unchanged.37

The Third International Consensus Definitions for Sepsis and Septic Shock (Sepsis-3) were published in 2016. Sepsis was defined as life-threatening organ dysfunction caused by a dysregulated host response to infection. Clinical criteria for organ dysfunction (SOFA) and septic shock were also updated. Another update was the establishment of quickSOFA to help rapid identification of patients in out-of-hospital or emergency department settings.38

In the past, scientists assumed that the clinical features of sepsis were the result of overly exuberant inflammation, which was reflected in the initial 1991 definition of sepsis. Later, with better understanding of the pathophysiology, it became apparent that a much more complex and multi-factorial host response was responsible. Infection triggers both proinflammatory and anti-inflammatory processes that ultimately contribute to the clearance of infection and the tissue damage that leads to organ failure.41

Immune cells are activated by both pathogens and injured tissues through an interaction pattern-recognition receptor. These receptors recognize structures with pathogen-associated molecular patterns and/or damage-associated molecular patterns to initiate innate immunity.42 These pathways ultimately lead to expression of genes involved in adaptive immunity and inflammation.43

Sepsis is commonly associated with altered blood coagulation. This may involve several mechanisms, such as the action of tissue factor, impaired anticoagulant mechanisms including the protein C system and antithrombin, and compromised fibrin removal.44

Through humoral, cellular, and neural mechanisms, the immune system can down-regulate the potentially harmful effects of the proinflammatory response.45 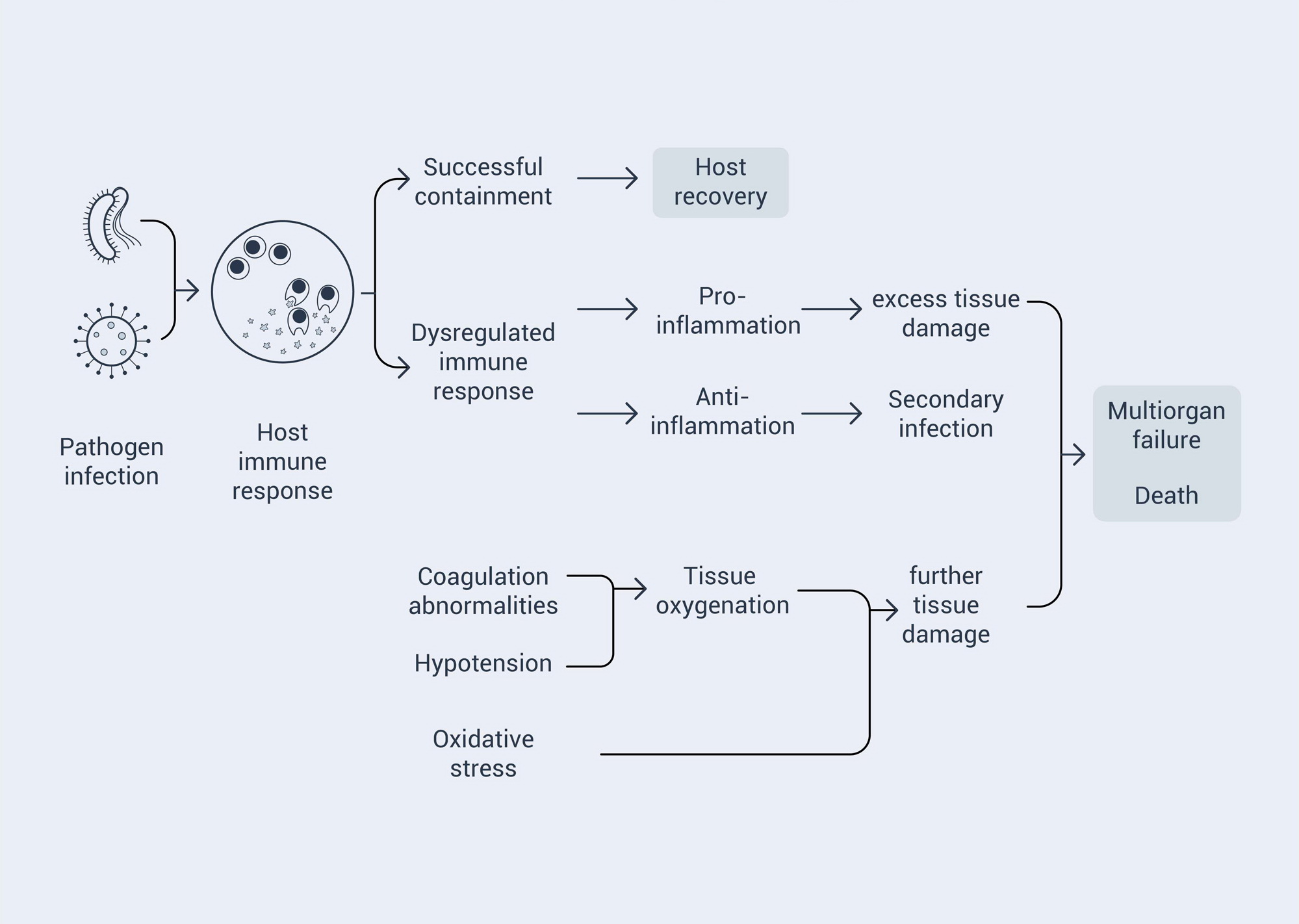 Clinical guidelines for management of sepsis were developed by the Surviving Sepsis Campaign, a collaboration of the Society of Critical Care Medicine and the European Society of Intensive Care Medicine. These guidelines were updated in 2017.48 The elements of the guidelines can be organized into two main “bundles” of care: an early-goal-directed therapy bundle for the first six hours and a management protocol used after the first six hours, usually in an ICU.

The principles of the initial management bundle are to provide cardiorespiratory resuscitation and mitigate the immediate threats of uncontrolled infection. A standard approach focuses on early fluid resuscitation, timely antibiotic administration, and appropriate use of vasopressors.49

After the first six hours, attention focuses on monitoring and support of organ function, avoidance of complications, and de-escalation of care.50 The principles here are in line with the general standard care for critically ill and intubated patients, which are to prevent ventilator-associated pneumonia, venous thromboembolism, and stress ulcers; and to provide glycemic control and appropriate nutrition.51

The advances in reducing the risk of imminent death associated with sepsis have been achieved due to progress in intensive care, increased awareness, and evidence-based guidelines. Recent advances in molecular biology have provided insight into the complexity of pathogens, alarm recognition by the human host, and various responses of the host. However, this improved understanding of the underlying biological information has not yet been successfully translated into new effective therapies.52 At the same time, as more patients survive sepsis, concerns mount regarding subsequent implications beyond the acute phase. New strategies are also needed to support sepsis patients in low-income countries who have no access to modern intensive care.

Researchers have tested agents with both highly specific and broader immunomodulatory effects. Some of them have been associated with potential benefits, but the results are not consistent, and none of the agents have been integrated into routine sepsis care.

One of the possible reasons for the failure of these earlier attempts is that young, healthy animals are tested in preclinical studies, while patients with sepsis are often elderly or have serious coexisting illnesses, which may affect the host response and increase the risk of acute organ dysfunction.53 In clinical studies, the agent is administered according to a standard formula to patients typically enrolled based on very broad criteria. Such an approach is probably overly simplistic for a complex and highly individualized condition like sepsis.

Although novel therapies addressing dysregulated host responses to infection can be promising, they will only yield positive results if tailored to individual needs. For example, when treating viral sepsis in COVID patients, immunosuppressants could calm the cytokine storm, but also raise the risk of secondary infection. Ideally, only patients who are identified or predicted to have immune over-reaction should be selected for immunosuppressant treatment. Precision medicine, the latest and promising approach to treating cancer, might help to provide new strategies in combination with more targeted drug development and better patient selection.

Coagulation: is the process that blood changes from a liquid to a gel type clot.