AQPs are involved in fundamental cellular and body functions. A loss of function or dysregulated function of AQPs would lead to pathological conditions. In Chapter 4. we described the consequences of losing AQP function. Here, we want to assess where clinical translation currently stands. One of the promising approaches for AQP-based therapy is to develop small chemical molecules that modulate the function of AQPs. From our research, it appears most related clinical trials used AQPs as biomarkers. Only two approaches involved AQPs as a drug or therapy target.

In terms of pharmaceutical drug development, it is usually extremely hard to address the consequences of function loss in a specific gene or protein in a curative way. This applies equally to small chemical molecules or biopharmaceuticals.

To our knowledge, neither a small chemical molecule nor a biopharmaceutical that can functionally restore AQP protein function are under clinical development so far.

A more promising approach seems to be the development of small chemical molecules that modulate the function of AQPs. When inventing and applying AQP modulators, it should be possible, for example, to attenuate the function of AQP channels. This might be applicable in particular to pathophysiological conditions, under which a specific and beneficial attenuation of an exaggerated water or glycerol transport of an AQP protein can be expected. Novel molecules would initially be assessed in relevant pre-clinical disease models to confirm their efficacy in these models and to gain deeper insight into their mode of action. This part of drug development is often described as the discovery process. A patent review on AQP modulators has recently been published by Soveral and Casini.132 One of the leaders and experts in this area is the company Apoglyx, which owns a broad portfolio of AQP modulators. Patents were found via a Google search and are tabulated in Appendix A at the end of this report.

The generic development plan described there (see Figure 6.1) involves the necessary preclinical safety studies that would facilitate the translational step from preclinical disease and safety models to humans. Preclinical models that are often used for regulatory safety studies involve a rodent and a non-rodent species and must be relevant for the drug’s mode of action and expected off-target effects. Once sufficient safety information is obtained, dosage and treatment schedules are determined for Phase I trials in humans. Phase I studies usually involve 20 to 100 healthy volunteers or people with a disease or condition, and can last up to several months (see Figure 6.2). Their main purpose is to determine compound safety and dosage.

In Phase II, up to several hundred people with the same disease or condition are treated for several months or up to two years in order to determine efficacy and potential side effects. Finally, in Phase III, 300 to 3,000 volunteers who have the disease or condition participate in one- to four-year studies with the goal of further assessing efficacy and monitoring potential adverse reactions that otherwise would remain undetected. If the new pharmaceutical drug gains regulatory acceptance, Phase III studies might be followed by Phase IV studies, where several thousand volunteers who have the disease or condition are monitored further for safety and efficacy of the treatment. 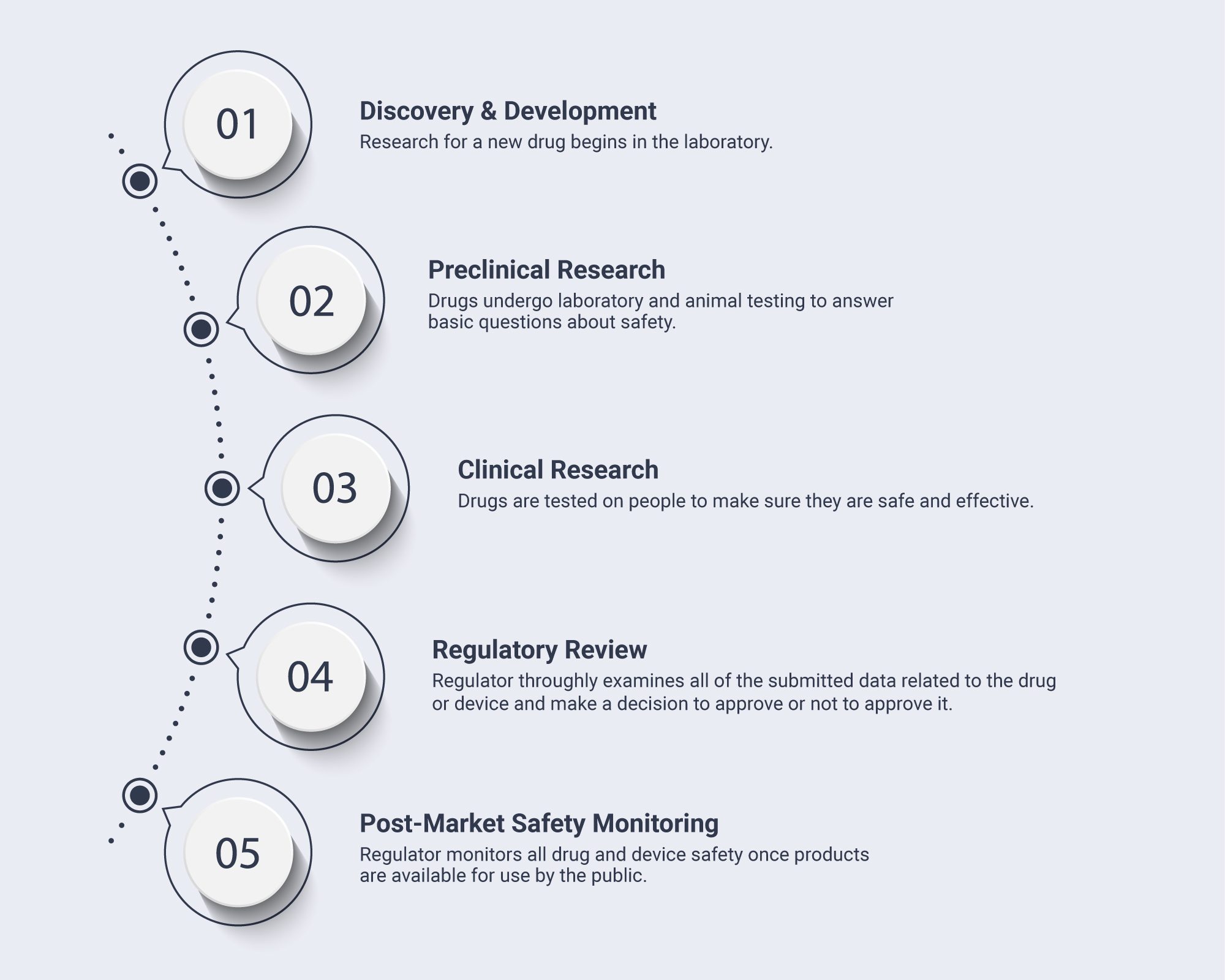 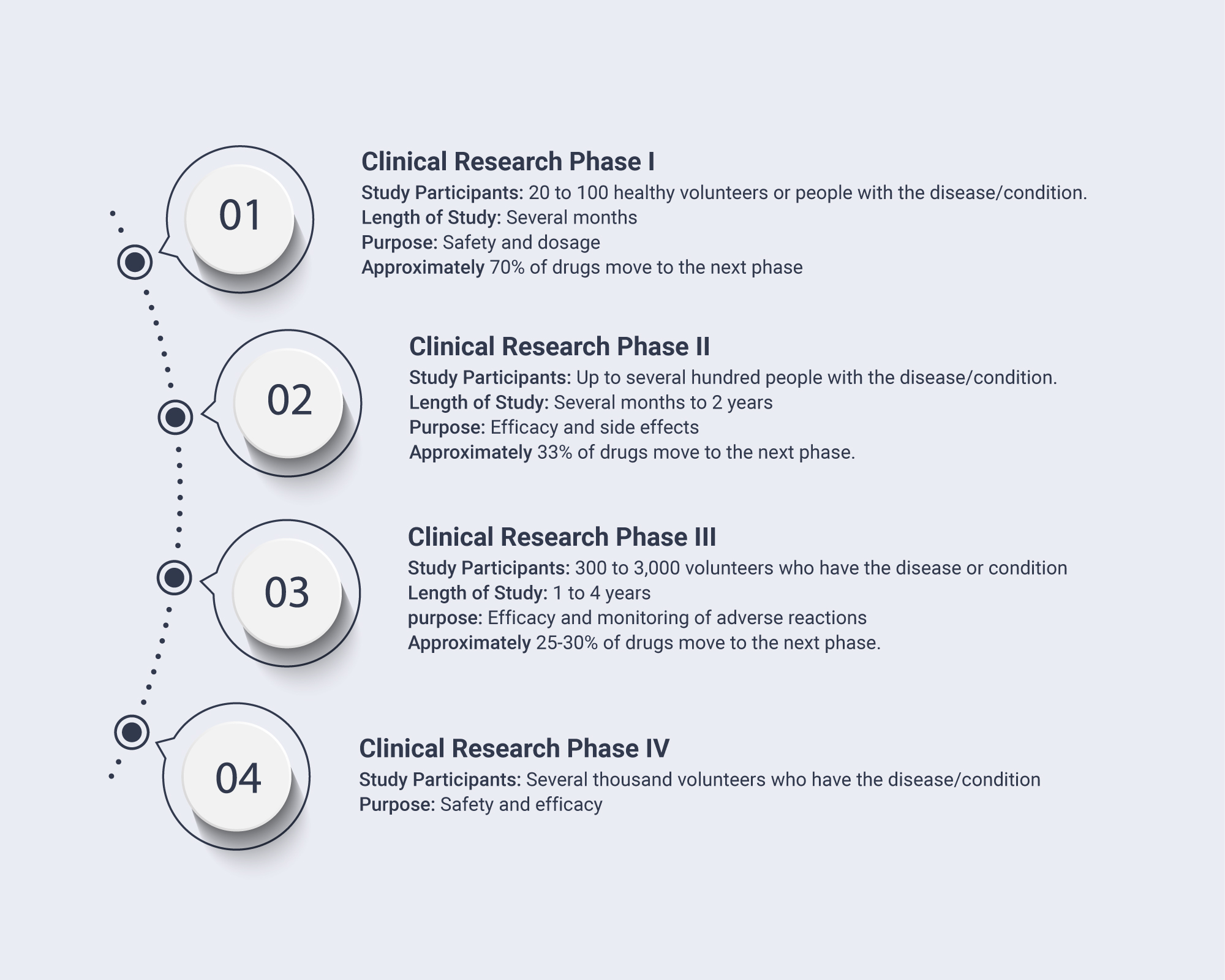 In order to get an idea of how AQPs are addressed in clinical studies, we searched ClinicalTrials.gov for studies that were determined to be incomplete. ClinicalTrials.gov is a web-based resource for clinical studies that contains information about many, though not all, medical studies in human volunteers. It currently contains approximately 350,000 studies in all 50 US states and more than 200 other countries. When searching the database, we found 76 studies that contained the term “aquaporins” or mentioned AQP-based therapies (see Appendix B to Chapter 6 at the end of this report). The majority of these 76 studies used AQP as biomarkers of diagnosis, efficacy of therapy, or disease progression, and many of them were observational. Some examples are the presence of AQP4-autoantibodies as optic neuritis or neuromyelitis optica in the blood or urinary AQP2 in relation to kidney function or pathologies.

We found only two approaches that can be considered to involve an AQP as a drug target or therapy. One approach aimed to restore salivary flow in people with irradiation-induced parotid salivary hypofunction. A recombinant adenovirus-based vector was used for AQP1 gene therapy (NCT00372320, NCT02446249)137 138 139 All patients benefited from the therapy.

The other approach is based on AER-271, an aquaporin 4 (AQP4) inhibitor under development for the treatment of stroke, acute stroke, and ischemic stroke. NCT03804476 is a double-blind, randomized, placebo-controlled, sequential-group study to assess the safety, tolerability, and pharmacokinetics of a single ascending dose and multiple ascending doses of intravenously (IV) administered AER-271 in healthy human subjects. AER-271 has been shown to reduce cerebral oedema and to improve neurological outcomes in rodent models for asphyxial cardiac arrest140 and ischemic stroke.141 The results of the clinical trial were not published yet at the time of this report.

AQP remain promising, but elusive drug targets. So far, we have found two approaches that made the translational step into clinical development, including an AQP4 inhibitor for stroke. For AQP modulators that are small chemical molecules, the challenges that can be expected in clinical drug development are not much different from those any in other drug developments – namely, safety and efficacy.

An increasing number of AQP modulators is becoming available, and the increasing insights into their function using preclinical disease models will inevitably lead to new and important pharmaceutical drugs for human AQP targets. Beyond human drug targets, we should also pay attention to AQPs as targets of human parasites such as Plasmodium species or Trypanosoma brucei that have the potential to address important human diseases such as malaria or human sleeping sickness.142 143 AQPs continue to hold great promise as drug targets. Since they have just started to unfold their potential, we expect great progress in this field in the near future.

133. U.S. Food and Drug Administration (FDA) 2018a. Learn about drug and device approvals. https://www.fda.gov/patients/learn-about-drug-and-device-approvals. Content current as of 18 June 2018.